Methods of heading in navigation

Home » Methods of heading in navigation 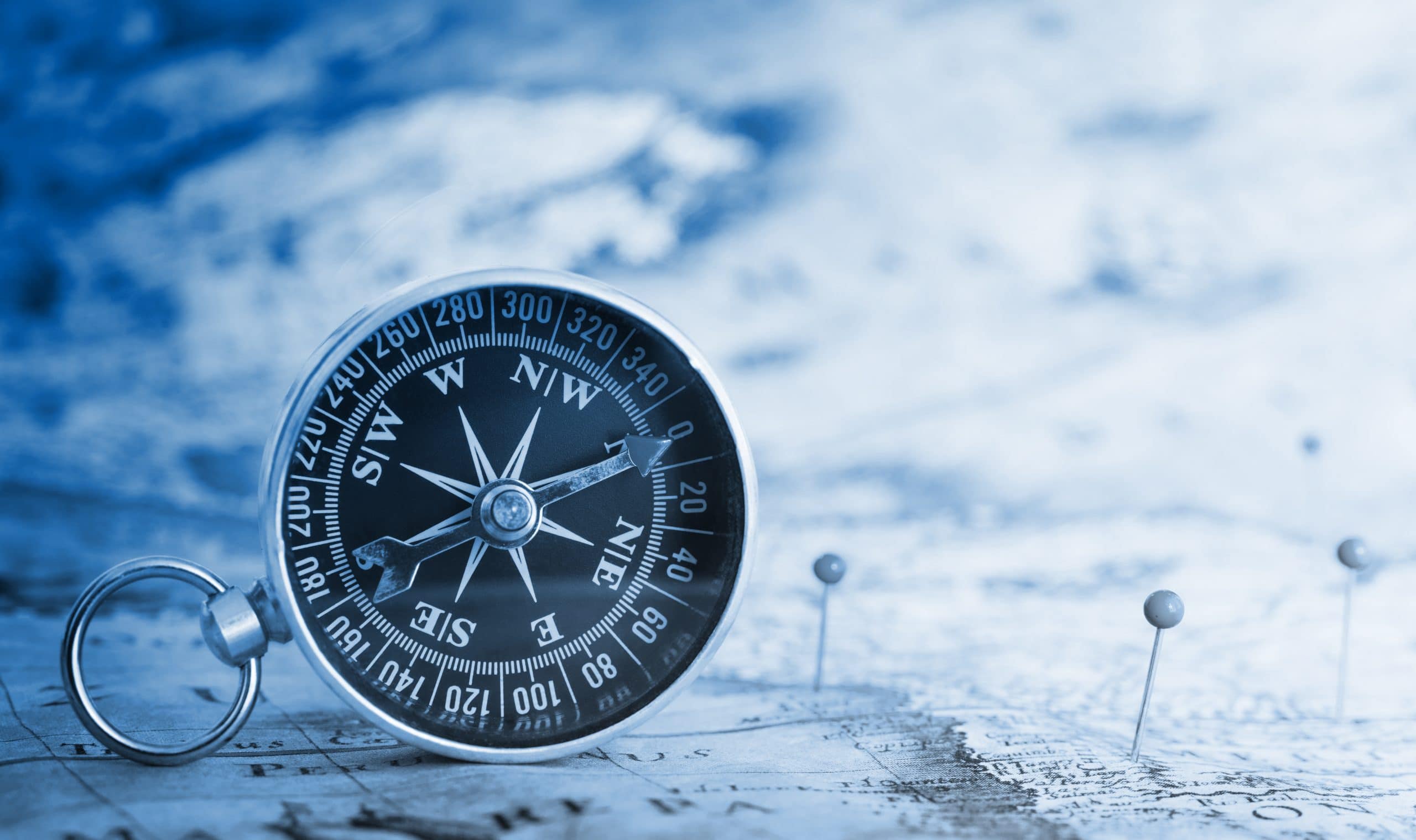 There are several methods to determine heading in navigation when using an Attitude Heading Reference System (AHRS) or an Inertial Navigation System (INS). As such recommending an appropriate heading source should be based on typical application requirements. These are indicative but should be evaluated fully for individual applications.

Velocity heading works by deriving heading from the direction of velocity and acceleration by successive GNSS (global navigation satellite system) measurements. It works well with wheeled or rail-mounted vehicles that do not move sideways under most conditions, and for whom heading is primarily used for navigating on the move without long periods of GNSS interference. Velocity heading requires a GNSS position fix and a horizontal vehicle velocity of at least 1.15 m/s. The heading accuracy is hence dependent on the quality of the GNSS signals and the speed at which the vehicle is moving.

While basically immune to magnetic interference, velocity heading is vulnerable to satellite interference, for example from trees or tall buildings. It does have fewer mounting constraints to avoid sources of interference and is easier to aid than magnetometer heading (for example using an odometer input). It does not require calibration post-installation, unlike magnetometers.

Velocity heading does not work well with helicopters, boats, or other vehicles that move sideways (sideslip), because the algorithm will then estimate vehicle course over the ground rather than the vehicle heading. It is also ineffective for stationary applications, such as targeting or tracking the heading of slowly moving objects such as people fitted with an INS. Velocity heading should not be used in environments where GNSS is not available for very long periods, such as subsea or mining applications.

Velocity heading is very effective for cars, rail and wheeled vehicles that move over 1.15 m/s for a reasonable proportion of their operation. It is generally better to use a different heading source for helicopters, boats, planes or drones.

Advanced Navigation devices include a reversing detection algorithm to determine if the vehicle has turned around, or is simply traveling in reverse.

Dynamic interference sources include high current wiring, electric motors, servos, solenoids, and large masses of ferrous materials that do not move with the INS. Dynamic interference sources are inherently variable in magnitude over time, and cannot simply be calibrated away. Magnetometer-based INSs should, therefore, be located as far away from these sources as possible. Magnetic shielding of problematic sources using mu-metal or similar materials may help in some limited circumstances, but distance is the most helpful mitigation.

Advanced Navigation devices include a special algorithm to help remove the effects of dynamic magnetic interference and making it possible to compensate for most typical interference sources encountered.

Magnetic heading is able to provide heading under most operating conditions but at considerably lower accuracy when compared to dual-antenna heading. This makes it a preferred method for cost-constrained systems or where GNSS reception is poor.

North-seeking using a FOG (Fiber Optic Gyroscope) is very accurate, but this accuracy is dependent on latitude; the closer to the equator, the higher the heading accuracy, as the relative movement is greater at the equator. Another method for determining headings is to measure the rotation of the Earth in space, a process often known as north-seeking or gyro heading. Using sophisticated 3-dimensional mathematics, the direction of the true north can be determined by taking gyroscope measurements over a period of time. The earth rotates at the rate of 360 degrees every 24 hours (0.25 degrees per minute), and therefore an extremely sensitive gyroscope is required to reliably distinguish this.

Gyrocompasses / Fiber Optic Gyroscopes are sensitive to movement, shock, and vibration and can require some procedure and time to initialise which makes them unsuitable for some vehicles and applications. They can, however, determine heading without any external reference which proves gyrocompass heading a strong choice for GNSS denied environments with generally low levels of shock and vibration.

A dual antenna GNSS receiver can determine the heading by comparing the position of two GNSS antennas. This method is preferred when a good GNSS signal reception is available as it provides great cost-efficiency and very accurate heading. Heading accuracy can be further improved by increasing the antenna separation distance.

Acoustic heading allows a known heading solution, from an alternate source such as dual antenna GNSS placed on a surface vessel, to be transferred acoustically through the water to a subsea device. This method of heading transfer uses a pair of USBL (ultra-short baseline) devices calculating the acoustic approach angles of the signal and can achieve an angular accuracy comparable to a high-end gyrocompass.

The acoustic heading is insensitive to magnetic or electrical interference and is particularly suitable for systems operating relatively near the surface or which require a data or signal link to a surface system. Unlike gyro heading, acoustic heading has no dependency on latitude.

This section makes some general recommendations on appropriate navigation heading sources based on common scenarios. We have also identified the Advanced Navigation device that most closely matches this application, based on our extensive customer portfolio.

On-road vehicles are usually capable of performing a 2D magnetic calibration process, whereas a 3D calibration is almost always physically impossible. Vehicles can also function with a gyrocompass, although these are often excluded on cost grounds unless operating underground (for example mining). They are not subject to high levels of lateral movement which means course and heading are typically the same, and therefore velocity heading is possible, but they are often subject to short periods of GNSS-denied environments such as tunnels. A key selection criterion is how long the vehicle must operate without GNSS; longer periods will require more capable (and more expensive) inertial measurement capability.

Off-road vehicles are usually capable of performing both the 2D magnetic calibration process and the north-seeking process. High vibration and shock levels may also make them unsuitable for FOG-based devices.

Trains are not typically capable of performing a magnetic calibration of any sort and are additionally subject to high levels of dynamic electromagnetic interference, making magnetic heading unreliable. The vehicles are laterally constrained by moving on tracks which means course and heading are always the same. On face value, this might suggest velocity is applicable, however, trains are subject to long periods of operation in GNSS-denied environments such as tunnels, and stopping for long periods will cause heading to drift. Dual-antenna systems are recommended for this application to maximise heading accuracy and stability. If absolute accuracy is important during relatively long periods of absent or unreliable GNSS, then FOG-based systems are recommended and will perform well due to the generally low levels of shock and vibration present.

Ships and boats are usually capable of performing a 2D magnetic calibration process, and provided the INS is well separated from powerful sources of magnetic interference magnetic heading is a viable option. Velocity heading is not recommended as most vessels can move sideways under the influences of currents, wind, thrusters, etc. They are sometimes subject to short periods of GNSS-denied environments such as bridges, or whilst navigating close to obstructions.

The best navigation heading source for the majority of surface vessels is dual-antenna heading. This allows for very accurate navigation in environments with minimal satellite interference, at a lower price point than a gyrocompass. For vessels engaged in very high-accuracy applications, a FOG-based GNSS system is strongly recommended.

Underwater vehicles operate at low speeds and are subject to substantial lateral movement, making velocity heading impractical. The lack of satellite visibility, except at the surface, also rules out dual-antenna GPS heading schemes.

Underwater vehicles are one of the applications for which a gyrocompass is strongly recommended, as the low-dynamic, well-damped operating environment maximises the achievable accuracy while not relying on satellite signals.

For underwater vehicles operating at depth under 1000m, the acoustic heading is strongly recommended as it is more accurate than a magnetometer-based solution and cheaper than a gyrocompass.

Very high-speed fixed-wing aircraft may face speed and/or altitude limits that restrict the GNSS receiver options and therefore the INS choices available. Most fixed-wing aircraft move too rapidly for a gyrocompass to reliably track and so this heading method is not recommended.

While magnetic heading is feasible, the accuracy is considerably inferior to dual-antenna GPS heading, which is recommended for the vast majority of airborne applications.

Most observations that apply to fixed-wing aircraft also apply to helicopters, although speed and altitude limits are generally not a concern.

Due to the relatively low dynamics of these aircraft, either magnetic or gyro heading sources may be suitable. Velocity heading is not recommended due to the substantial lateral movement of aircraft in general. One distinction to make for a balloon is that vehicle course may be more useful than payload heading, which may be prone to rotation or twisting. Depending on the size of the vehicle, 2D or 3D magnetic calibration may be possible.

These vehicles may face altitude limits that restrict the GNSS receiver options and therefore the INS choices available. Many commercial GNSS receivers are designed to stop functioning above altitudes of 18,000m by ITAR regulations.