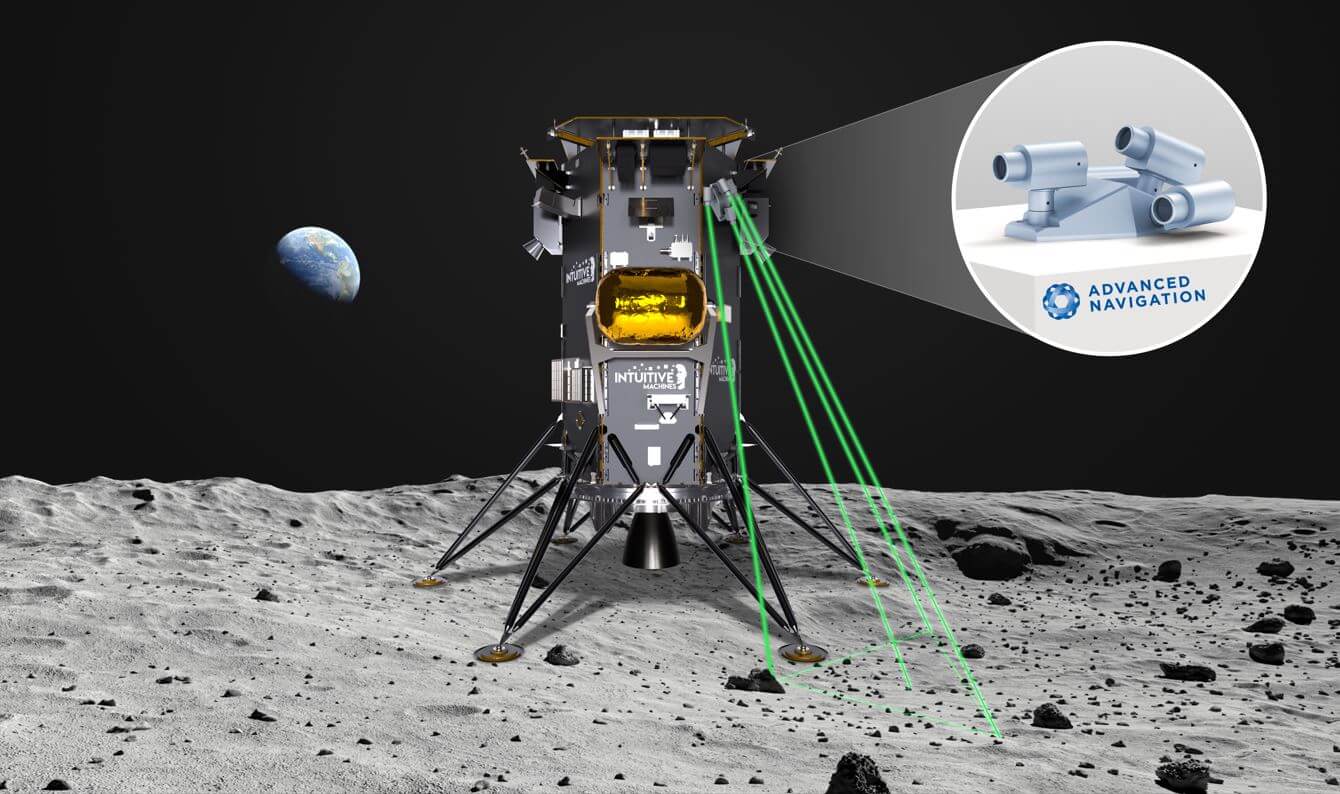 Australia, July 2022 – Advanced Navigation, one of the world’s most determined innovators in AI robotics, and navigation technology has today announced its ambitions to be the first Australian company to reach the Moon through its development of two unique navigation systems.

“The team is absolutely thrilled to see years of research in development progress into successful technology. We look forward to being the first Australian company to reach the Moon in early 2023 and 2024, this will be a huge milestone for us,” said Xavier Orr, CEO and co-founder at Advanced Navigation.

“Inertial and robust reference based navigation is a critical capability in space missions, where terrestrial navigation satellite systems, such as GPS are non-existent. Our lightweight technology is estimated to deliver $85 million in value for lunar missions, helping to deliver heavier payloads to further advance research, exploration and commercial developments on the Moon.”

Cost efficiency made possible with the miniaturisation of technology

Lighter, more compact flight systems that integrate into the guidance navigation and control (GNC) system are integral in reducing the overall weight of the spacecraft. This helps provide more space for commercial “payloads” such as satellites, research and test equipment, or personnel. The heavier the payload the more expensive and complex it is to deliver. There are major cost savings to be gained by adopting technology that provides the spacecraft with more payload space. Advanced Navigation delivers just this with its latest technology. Both systems will enable positioning and accuracy that exceeds the best demonstrated products in the world today, while weighing far less.

The Boreas X90 is a strategic grade inertial navigation system (INS) that enables positioning and navigation capable of maintaining extreme precision without using relatively fixed references, such as stars, or requiring base station control telemetry. This is critical for long endurance space missions involving complex orbits and trajectories.

The light detection altimetry and velocimetry (LiDAV) system uses lasers to measure a significant number of parameters detailing a vehicle’s environment. Most importantly it can indicate the vehicle’s velocity and position relative to the lunar surface in three dimensions with extreme accuracy and precision. When visual references are unavailable and cameras fail due to lack of light, dust and other obscurities, LiDAV will provide primary navigation input. This technology is critical to perform complex autonomous landing procedures and confidently explore the lunar surface.

Spacecraft autonomy requires extraordinary situational awareness. Although the systems can be used as independent components of the spacecraft’s GNC autonomous stack, they can also be fused. Extensive trials have resulted in accuracy and reliability orders of magnitude greater than current industry benchmarks.

Advanced Navigation and Intuitive Machines are following the leadership of the U.S. and Australian governments in the Artemis Accords to undertake safe and peaceful space exploration while gaining a deeper understanding of Earth’s own satellite, the Moon.

“Demonstrating this technology in the near term is essential. By 2026, our next phase of lunar lander, Nova-D, will begin delivering 500-1,000 kg of payload to the lunar surface, and we require access to reliable, redundant, and dissimilar sensors for landing,” said Crain.

“It’s imperative that our large lunar payload customers are confident that our systems will deliver the cargo safely and reliably. If we can demonstrate Advanced Navigation’s technology on our current Nova-C landers, we can significantly improve the robustness of landing with Nova-D.”

“Given the light weight and capabilities of the Advanced Navigation sensor systems, they are well suited for our Micro-Nova, a mini-extreme mobility lunar vehicle also known as a “hopper”.  Mass on the hopper is at a premium, but we require sensors that can help us fly to permanently shadowed craters and through lava tubes. We look forward to discovering more of the lunar surface with Advanced Navigation.”

The future of the next frontier in Australia

The development of the Boreas X90 was supported by the Australian Space Agency through its Moon to Mars Initiative: Supply Chain Capability Improvement Grant.

Enrico Palermo, Head of the Australian Space Agency said “Our Moon to Mars initiative provides Australian companies with the opportunity to showcase their knowledge and capabilities in projects that can support NASA in its inspirational endeavours. Advanced Navigation’s partnership with Intuitive Machines shows this initiative is accelerating Australian companies into international space supply chains.”

“It’s great to see Advanced Navigation continue to disrupt and challenge the status quo. Their latest technology will not only increase Australia’s space capability, but create exciting long-term export opportunities, bolster careers in the STEM sector and inspire the Australian public,” said Palermo.

“This is just one example of how Australia is collaborating with NASA on its Artemis program and is building on over half a century of collaboration in space. The Agency has also reached an agreement with NASA for an Aussie designed, built and operated rover to be included in a future mission.”

Not exclusive to space terrains

Space is but one frontier, this technology will have several applications on earth. The technology is well suited to aid aircraft during takeoff and landing, particularly in difficult conditions. It can also measure weather patterns far more accurately which will significantly improve weather detection and forecasting. In the future, this technology will guide flying taxis helping to deliver passengers to their destination safely. It will also navigate autonomous vehicles reliably under all conditions and build geophysical models from gravitational surveys.

Advanced Navigation products are designed and manufactured in Australia, and exported globally. The company engenders a culture of education and inventive thinking, with technological innovation a core value and a heavy bias toward breaking new ground in engineering, design, and performance. Continuing to work closely with leading academic institutions, Advanced Navigation is actively developing deep-tech products that are designed to help better serve the wider community on and off-planet.

Intuitive Machines’ complete Lunar Payload Delivery Services (LPDS) program unlocks the lunar economy to explore the solar system further and gain knowledge for the progress of humanity. As a premier provider of space services and technologies, Intuitive Machines is reestablishing the United States’ dominance on the ultimate high ground, the Moon. Designed by the greatest minds in spaceflight, Intuitive Machines’ LPDS program will send the first American spacecraft to the surface of the Moon since the Apollo Program and send the first spacecraft ever to reach the lunar south pole. Intuitive Machines is one of NASA’s contractors as part of the agency’s Commercial Lunar Payload Services initiative.

Led by Enrico Palermo, the Australian Space Agency was established in 2018 to coordinate civil space matters across government and support the growth and transformation of Australia’s space industry.